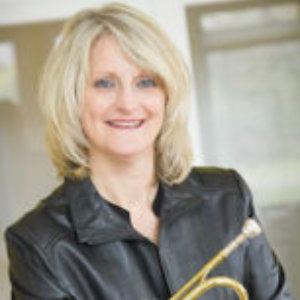 Amy Gilreath has won the respect and praise of musicians and audiences the world over for her beautiful sound and expressive interpretations.  As a soloist and chamber musician, she has been invited to perform in Cuba, Italy, Mexico, Russia, England and given multiple other performances throughout Europe as well as appearances at International Trumpet Guild Conferences and International Women’s Brass Conferences.  Amy is currently a member of Stiletto Brass Quintet, Monarch Brass Ensemble, the Consortium Brass Quintet and has been a past member of the Monarch Brass Quintet, Dallas Brass, Velvet Brass, Battle Creek Brass Band and Keith Brion’s New Sousa Band.  She has performed with many renowned musicians including Doc Severinsen, former band leader of the Tonight Show Band with Johnny Carson; Italian jazz trumpet artist Andrea Tofanelli.  Ron Romm, founding member of the Canadian Brass; and jazz trumpet artist Marvin Stamm.  Amy is a founding member of Stiletto Brass Quintet which has given performances at many festivals, performing art series, universities, and public/private schools.  Stiletto has also been guest artist with the Bradenton-Sarasota Pops Orchestra as well as the Heartland Festival Orchestra and released two recordings: Stiletto Brass Quintet with Doc Severinsen and Scarpe !.  Serving as Principal Trumpet of the Illinois Symphony Orchestra since 1999, Amy also holds the Principal Trumpet position with Sinfonia da Camera in Champaign Illinois. In addition, she has also performed as an extra and a sub with the St. Louis Symphony.  Amy can also be heard on her solo CD Enjoying Life and on various Sinfonia da Camera recordings released by Albany Records.

As a long-standing faculty member of Orvieto Musica, a chamber music festival held in Orvieto Italy and the current Director of the Festival’s Trumpet Fest, Amy has taught and performed with many trumpet professors and students from the US who have attended the festival throughout the years.  As the Director of TrumpetFest, she conducts the trumpet ensemble, presents master classes for the participants, and performs on the TrumpetFest concerts.

In 2021 Amy joined the School of Music faculty at the University of Illinois Urbana-Champaign teaching trumpet and coaching chamber music. In 2019 Dr. Gilreath retired as Professor of Trumpet at Illinois State University after serving on the faculty since 1990.  During her time there she was the first faculty member to be awarded the Illinois State University Outstanding Creative Arts Award for her numerous national and international performances as a chamber musician, soloist and orchestral musician and many publications in international journals.  She was also a recipient of the Outstanding Teacher Award in the School of Music.  Her students have also won numerous awards, teach throughout the United States at universities and public schools, and are performing in Canada, Portugal, Finland, and Saudi Arabia, and in the United States Army Band, the United States Coast Guard Band, and numerous military field bands throughout the US. She currently serves on the Board of Directors for the International Women’s Brass Conference and has served twice on the Board of Directors for the International Trumpet Guild.  Amy has also been a featured artist in the highly acclaimed international brass magazine “The Brass Herald.”

Growing up in a time when young girls did not play the trumpet, let alone pursue a musical career in trumpet, Amy is proud of her role of helping break the glass ceiling of this long time stigma.  After receiving her Doctor of Musical Arts and a Masters in Performance from the University of Illinois, Amy was one of the few women to hold a full time university trumpet professor position in the 1990’s, and the first woman trumpet professor at Illinois State University.  In 2010 the dream of traveling to Russia became reality and while there, she became the first woman soloist to perform at the International Romantic Trumpet Festival in St. Petersburg, Russia.  Amy also presented a recital and masterclass at the famed Moscow Conservatory.