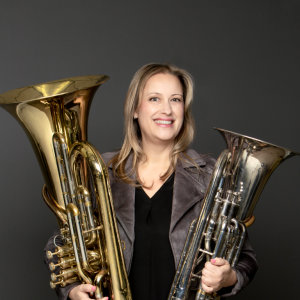 A native Vermonter, tuba and euphonium soloist Joanna Ross Hersey has produced two solo albums, O quam mirabilis (2010) and Zigzags (2015), featuring music by composers including Hildegard von Bingen and Libby Larson in combination with her own works. Joanna is President of the International Women’s Brass Conference, Professor of Tuba and Euphonium at the University of North Carolina at Pembroke, and a Yamaha and Parker Mouthpiece Performing Artist. As a composer, her new Fresh Faces series highlights diverse music for solo and chamber brass, available from her website. Joanna’s newest solo composition, ElevenTwelve, for solo tuba and electronics, takes soloist and audience alike on a tour of Hildegard von Bingen’s convent, through a map presented as a graphic score.

As a member of the Alchemy Tuba-Euphonium Quartet, Joanna performs throughout North America and Europe and can be heard on the group’s recordings Village Dances (1997) and Prelude and Groove (2012). For sixteen years Alchemy has been in residence each February at the Horn-Tuba Workshop in Jever, Germany where the group performs recitals, gives master-classes and conducts ensembles. Joanna studied with Dan Perantoni at Arizona State University, received a Master of Music in Tuba Performance from the New England Conservatory of Music studying with Chester Schmitz, and earned her Doctor of Musical Arts in Tuba Performance from the Hartt School. Beginning her career as Principal Tubist with the United States Coast Guard Band, Joanna performed throughout the country as a soloist and clinician after winning the position at the age of nineteen. Joanna has played for three U.S. Presidents, performed at numerous state functions for visiting dignitaries, and has appeared on The Today Show and Good Morning America. In her freelance career she has performed with artists including Placido Domingo, Roberta Flack, Marilyn Horne, Arlo Guthrie, Michael Bolton, Lee Greenwood, Arturo Sandoval and Jack Nicholson. In collaboration with Parker Mouthpieces, Joanna has debuted the Hersey Artist Model Tuba Mouthpiece, featuring a three component stainless steel design.