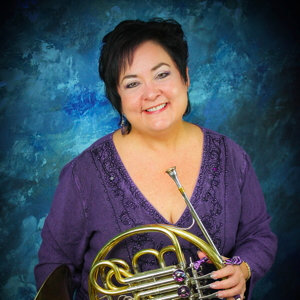 Growing up on a walnut farm in Springfield, Ohio with “ blue grass” and “gospel” music in her genes, Nancy Joy played horn, trumpet, cello, sang in the choir and had lead theater roles during her public school education.

Nancy Joy received a Bachelor of Music Education degree from Wittenberg University School of Music in Springfield, Ohio, studying with Dr. Richard Chenoweth and then completed a Master of Music in Horn Performance at New Mexico State University, studying with Dr. Warner Hutchison.  Nancy is currently in her twenty fifth year as Horn Professor at New Mexico State University.  In her first year at NMSU, Nancy created a horn choir, called the “NMSU Corno Crew” which is very active in premiering new works.  The NMSU Horn Choir has appeared as a premier performing ensemble at the following International Horn Society (IHS) Symposiums: 1999 in Athens, GA., the 2000 Symposium in Beijing, China; the 2005 Symposium in Tuscaloosa, AL; and the 2008 Symposium in Denver, CO.

Nancy was the Featured Guest Artist at the International Women’s Brass Conference (IWBC) “Holiday Brass” in Baltimore, MD in November 2011 and a contributing guest artist at the IWBC symposium in 2012, 2014, 2017 & 2019.  At IWBC 2012, Ms. Joy commissioned and performed the world premier of “Trio for Flute, Horn and Piano, Op. 54” by Linda Holland with Nancy’s trio, entitled Allura. Nancy was also a Featured artist at the Brazilian National Horn Symposium, in Natal, Brazil in September 2014.  She also performed with the Spanish Brass Luur Metales and taught at the Spanish Brass Symposium (SBALZ) in Alzira, Spain in 2012, 2013, 2015 and 2017.

Ms. Joy has served as a featured clinician at several NMMEA All-State Music Festival giving clinics on horn pedagogy.  She is the owner of the “Horn of Joy” music studio teaching private lessons to beginning horn students through high school level and is a requested clinician and solo performer in the southwest.  Nancy is also on the board of directors for the Interactive Video Audition Service International (IVASI) and presents clinics and demonstrations internationally, along with giving Breathing Gym Clinics in Germany, South Africa, and Colombia and all over the USA. Ms. Joy was elected to the board of the International Women’s Brass Conference, serving on various committees for the organization.